Electric Vs Gas Vs Induction Cooking

There are three main types of cooking hob available to the home chef: electric, gas and induction.

In this guide I’m going to take a closer look at all three, so that you can make an informed decision about which one is right for your own kitchen.

I’ll be looking at each type in detail, but there are four fundamental issues to consider:

Cost: There’s a reason why electric cooktops are so prevalent: the relatively inexpensive cost! Investing in gas hobs will cost more money, while an induction surface will take an even bigger bite out of your budget.

Compatibility: Not all cookware materials are compatible with induction cooking in particular, and where a magnetic quality is necessary. If you’re determined to go down this route, then you may need to invest in new cookware.

Control: Certain cooktops take longer to heat up than others, and you’ll have less fine control over the temperature too. If you need near-instantaneous heat adjustment you’ll certainly favor gas over electric, for example.

Safety: If safety is particularly important to you – perhaps because you have young children – then the open flame of a gas hob may be less appealing than, say, an induction hob.

Those are the core considerations, then, but let’s take a closer look at all three.

Electrical hobs are by far the most popular option for those who only require limited control over the cooking process.

A great deal of that popularity comes as a result of the relatively low cost involved.

They’re also compatible with a wide variety of cookware types and materials, so you’re unlikely to have a problem using your favorite pots and pans.

These hobs last a long time too, and are pretty easy to clean. Once cooled it’s just a case of giving them a good wipe down.

If you settle for electrical hobs though, you might want to consider investing a little bit more of your budget on a ceramic set.

Although these are more expensive, they produce excellent heat distribution which makes for more even cooking.

They also heat up to the optimal cooking temperature faster – although not as fast as the gas and induction options I’ll look at in the next sections.

Whichever electrical hob you favor, just be aware that they are slower to respond to fine temperature control. This may be a problem if you’re starting to get a little more adventurous with your cooking.

You’ll also find that electrical hobs aren’t as energy efficient as the alternatives, and use more power in general. That, of course, means higher utility bills in the long run. 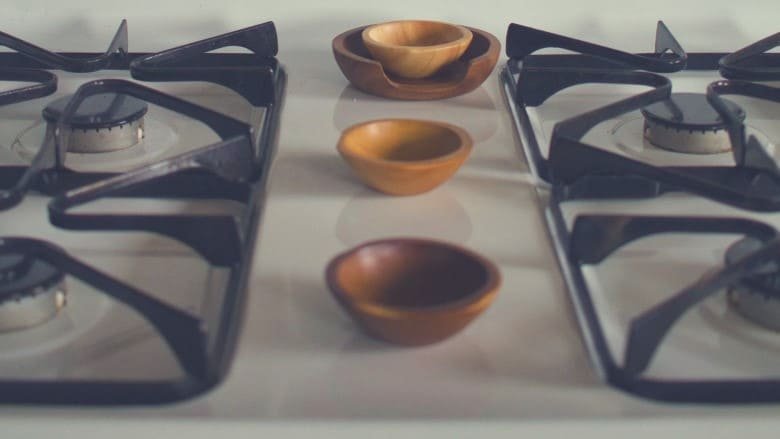 Gas hobs are the second most popular option of the three, and provide a great deal more fine control over cooking temperatures. They’re a familiar sight in professional kitchens for this very reason.

They’re a great middle-ground option if you want to develop your cooking skills further, while also having at least one cautious eye on your budget.

Gas stoves provide heat instantly. Furthermore, temperature changes occur rapidly, allowing you to tweak the heat as and when required.

There’s an aesthetic consideration here as well. Some people just love the look of an open flame, and the size of that flame is actually a very useful visual aid!

Gas hobs are also compatible with a very wide range of cookware, and so it’s pretty easy to take a “pick and mix” approach to choosing the pots and pans you really need.

It goes without saying that you’re going to need gas installation in your home to take advantage of all these benefits.

If you already have a gas supply in your home, it should be a relatively trivial affair for a qualified professional to get you set up. If not, things get a good deal more expensive.

There are a couple of important drawbacks to think about with gas hobs though.

First of all, they’re generally much harder to clean than their induction or electrical counterparts.

A quick wipe down will rarely suffice here, and instead you’ll find yourself scrubbing all kinds of baked-in gunk off the grill surfaces.

There’s a safety consideration as well. As you’re using an open flame, there’s an increased risk of fire.

If you have young children, you may also want to consider the risk of curious fingers finding their way onto either the gas dials or the cooking surface once it’s been lit.

Induction cooking is a relatively new addition to the market, but it offers a few unique advantages over the two traditional hob types.

Before I go into that though, how exactly does induction cooking work?

Curiously, there’s no actual burner on these stovetops. Instead, the heat is generated using electromagnetism. Right beneath the induction surface is a coil, which creates a magnetic field.

Adding a pan to the surface creates a flow of current, which heats up the pan and cooks the food inside.

The big advantage here is that the surface of the stovetop remains cool, and so can be considered the safest option of the three I’ve outlined.

Heat is generated quickly too, and you have more fine control over temperature adjustments than you do with an electrical stove. It’s a little more like the gas option in this regard.

Unlike gas hobs though, induction elements are pretty easy to clean.

Because the surface itself isn’t being heated, you won’t get scraps of food cooking into it. Less time scrubbing, more time cooking, in other words.

These benefits come with a price, however. Induction ovens cost more money than both their electrical and gas counterparts.

You also need to be sure that your existing cookware is compatible with the induction process, or be willing to invest in more pots and pans if they’re not.

The pans need to be able to conduct that electromagnetic current if they’re to heat up. You can test whether or not this is possible by holding a magnet to the bottom of the pan, and seeing if there’s attraction.

If that proves to be the case, you’re probably fine!

I’d still recommend checking with the manufacturer first though, as installing an induction stove will represent a significant investment.

Hopefully that’s made things a little clearer! You should now have a good grounding in the pros and cons of the three most popular stove options.

If you have any questions, let me know in the comments and I’ll do my best to answer them for you.