How To Clean A Rusty Cast Iron Skillet With Vinegar

If your cast iron skillet is so rust-ridden that you’re considering throwing it away – STOP!

The good thing about owning a really beaten up skillet is that you can try some of the more abrasive methods for restoring it.

If you’re already resigned to throwing it away, after all, there’s really no harm in going hard at the problem.

Enter the vinegar soak, a tried and tested method for eliminating rust from cast iron cookware. In this guide I’ll explain all the steps you need to follow.

There’s one important thing to mention before we start, however.

Soaking and scrubbing your cast iron skillet will remove the seasoning you had on it. You’ll need to reapply it, but it’s a pretty small inconvenience compared to buying a brand new pan! 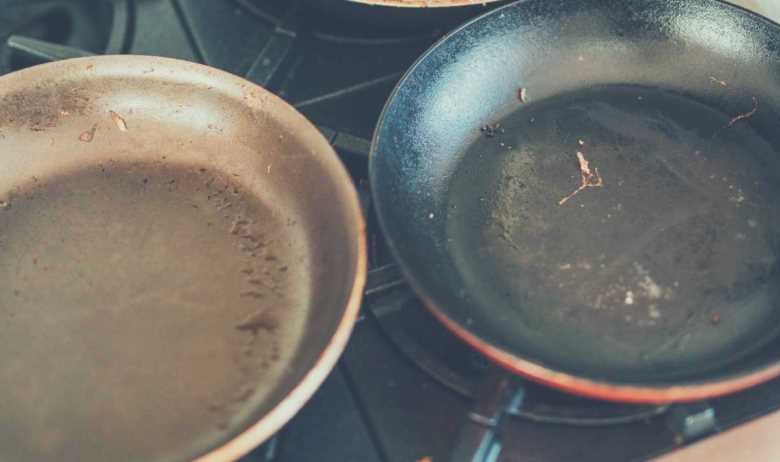 First, let’s check the condition of your skillet.

If there’s only a superficial layer of rust on the interior and exterior surfaces, you might be able to skip the soak altogether.

If you can gently brush away the damage, ignore the next step and move onto the section about scrubbing.

If the rust is much deeper than just the surface, it’s time to give the skillet a vinegar soak.

To do this, you’re going to need to combine white vinegar with water. Aim for an equal 1:1 ratio of both ingredients.

You’re also going to need to cover the skillet entirely with this solution. The easiest way to do this is to complete the soak in your kitchen sink.

Pop the plug in, add the cast iron skillet and then pour on the vinegar / water mixture until the cookware’s just covered over.

How long should you let the skillet soak for?

Cast iron will tolerate a soak for up to eight hours. The longer you leave it though, the more you risk damaging the surface that sits beneath the layer of rust.

For this reason, it’s important to check in on the skillet every hour or so.

If the rust flakes off easily at each hourly checkpoint, consider the soak done. If it’s not, leave it for another hour and then check again.

Now you’ve got the skillet in a scrubbable condition, it’s time to roll your sleeves up!

Because you’re resigned to losing your pan seasoning, you can afford to be more abrasive and make life a little easier for yourself.

That means you can break out the kitchen detergent and abrasive sponge. I wouldn’t go as far as using steel wool here, but you can definitely use a rougher material than usual for cleaning up.

You should find that, combined with warm water, the soap and scourer will get all the flakes of rust off.

If there’s still any lingering rust, it’s worth giving the skillet a second soak.

This time around though, be very careful about over-soaking it – if it’s nearly done, an hour of extra soaking will do. You’ve removed the worst of the damage, after all.

Assuming your skillet is now rust-free though, give it a good rinse and then dry immediately with paper towels.

You want to make sure the whole thing is bone-dry by the time you’re done, as lingering moisture can start the rust cycle all over again.

This kind of clean-up operation can’t help but damage the seasoning on your skillet.

If you already know what you’re doing here, skip on to the tips about preventing rust.

If you need help with this process, head over to my cast iron cookware seasoning guide. How To Avoid Rust Building Up On Cast Iron

Hopefully that process wasn’t too difficult, and you now have a rust-free cast iron skillet!

If that’s helped you fix the problem, you’ll no doubt be keen to prevent rust building up in the future too.

Here are some of the most common causes of cast iron skillet rust, and what you can do to avoid it from happening.

Cast iron really, really hates moisture and it’s the number one cause of rust.

For that reason, I recommend having a dedicated storage area in your kitchen that’s far away from sources of moisture. Keep all of your cast iron in there, and maintain it as a dry space.

If you stack your cast iron cookware, it’s also a good idea to add a layer of paper towelling between each item. That’ll prevent surface scratches.

I’ve got a guide to storing your cast iron skillet which goes into greater detail about best practise here.

Most importantly of all, you should never put cast iron cookware in the dishwasher! The material just can’t handle this kind of intense combination of heat and moisture.

After washing your skillet by hand, make sure that it’s also dried by hand immediately afterwards.

It’s not a good idea to leave these things to air-dry, as you really need to remove all the moisture right away before storing them (see above).

The vinegar soak is a tried-and-tested method for getting rust off a cast iron skillet. Follow those instructions and there’s every chance it’ll come back to life.

What if it doesn’t work? Sometimes if the rust gets in really deep there just isn’t anything you can do to fix it.

If you need a replacement, have a look at my guide to the best cast iron skillet brands. You’ll find an option there for every budget.