How To Cook Carne Asada In A Skillet – Recipe & Method

The dish carne asada literally translates from Spanish as “grilled meat”. For that reason, you might think the only way to do this dish justice is to cook it that way!

With a little bit of care in the preparation though, it’s perfectly possible to create amazing results using a pan on the stovetop.

What’s the best way to cook carne asada in a skillet though?

In this guide, I’m going to walk you through each of these steps in order, so you’ll be able to achieve incredible results in your own kitchen!

Before I do that I’ll mention one really important thing.

You’ll get much better results here if your skillet has a grill insert. That will help you achieve the similar searing effect of a grill. If you don’t have one of these, just heat a little oil in the skillet first.

A lid is also great for locking in the moisture of the meat while it’s frying. Again, not essential but definitely worth doing if you can! 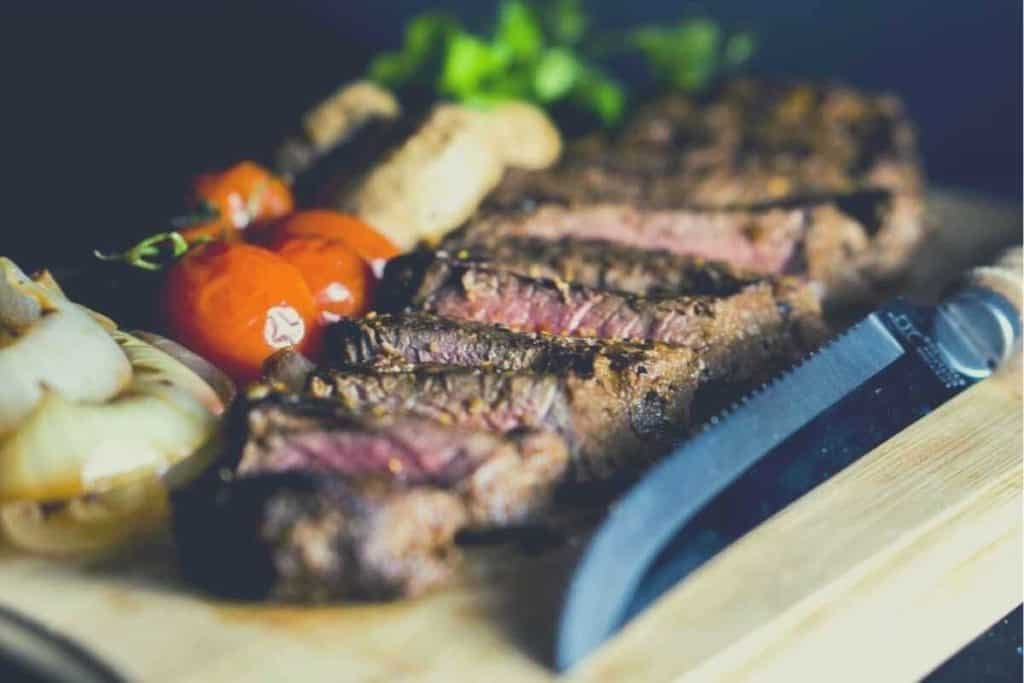 It doesn’t matter what you serve alongside your carne asada if you don’t prepare it the right way first.

If the meat isn’t properly marinated before cooking, it won’t pick up those deep flavors that are a signature part of the experience.

Let’s be honest, there are more marinade recipes on the internet than you’ll ever know what to do with. This is a timeless marinade recipe though, which you can tweak to taste once you’ve got the basics down.

In terms of the meat you choose, I highly recommend you opt for sirloin flap, or skirt steak. This stuff works like a dream!

Here’s everything you’re going to need before we start.

This amount of marinade works whether you’re preparing one or two steaks.

Add one steak at a time to the bowl of marinade and use the spoon to work the mixture into the meat. Once coated, use your clean hands to work the coating all over the surface.

Once you’ve prepared the first steak, add the second and repeat the process.

When all the meat has been prepared, leave it in the bowl and store in the refrigerator for at least one hour.

If you can prepare things earlier and give the meat four hours to soak up those juices, you’ll see much better results.

(Take a look at my refrigerator hygiene guide for more help on safely storing cooked – and uncooked – meats).

If you’ve got a grill insert, add it to your skillet and start heating the pan.

If not, add a few drops of your favorite cooking oil before heating.

Don’t use too much here, just enough to make it easier to turn your steaks off the cooking surface.

Step #3: Cook For 5 Minutes On Each Side

If you’re working with one marinated steak, add it to the pan. It should be sizzling as soon as it hits the surface. If not, turn the heat up temporarily, then back down once the temperature is stable.

Two steaks? Just add the second once the first is in position, and make sure they’re not overlapping.

For this kind of meat, you should aim to give each side 5 minutes of frying time in the skillet.

I like to put a lid over the skillet while the steak is frying too, to lock all those juices and moisture inside the pan.

Give the steak 5 minutes on each side, then put aside to rest before slicing.

Step #4: Slice Thinly Against The Grain

This is a really important tip that delivers big results!

When you’re cutting the cooked carne asada, do so against the grain of the meat. This will shorten up the fibers, and leave the meat much juicier and tender as a result.

That’s it! You’re ready to serve your delicious, juicy, deeply marinated carne asada however you wish!

That should be everything you need to know about making an incredible carne asada in a skillet.

Don’t skimp on the marinating time, use a grill insert and lid if you can, and don’t forget to cut it against the grain for the very best results.