How To Cook Spaghetti In A Skillet (Yes, Really…)

We’ve all been taught that there’s one single way to cook spaghetti.

Grab a massive pot of water, boil it, add salt, and then add your spaghetti strands.

(Oh, and don’t forget to spend an agonizing few minutes trying to tease your clump of rigid dry spaghetti into the depths of the water, as the lower half slowly softens up…)

There is another way I think you should know about.

I believe that using a skillet to cook spaghetti is not only a perfectly viable alternative – it’s a better way to cook it altogether.

In this guide I’m going to explain how to cook spaghetti in a skillet, and discover what might just be your next favorite kitchen hack. For more inspiration, take a look at my guide to making pasta in a microwave!

Why Cook Spaghetti In A Skillet?

The main advantage the skillet provides spaghetti lovers with is the shape of the pan.

A pot of boiling water isn’t tall enough to take long spaghetti strands. (Nor is a skillet, it’s true.)

That’s looking at the problem the wrong way around though.

Rather than having to work the dried spaghetti into a pot that’s half the height of the ingredient, you simply lay the pasta down lengthwise within the skillet.

You couldn’t do this in a frying pan, of course, as the sides are too shallow and you’d end up splashing water all over the cooktop as you stir.

Skillets, on the other hand, have taller and (usually) straighter sides. That makes them much more suitable for holding liquids. 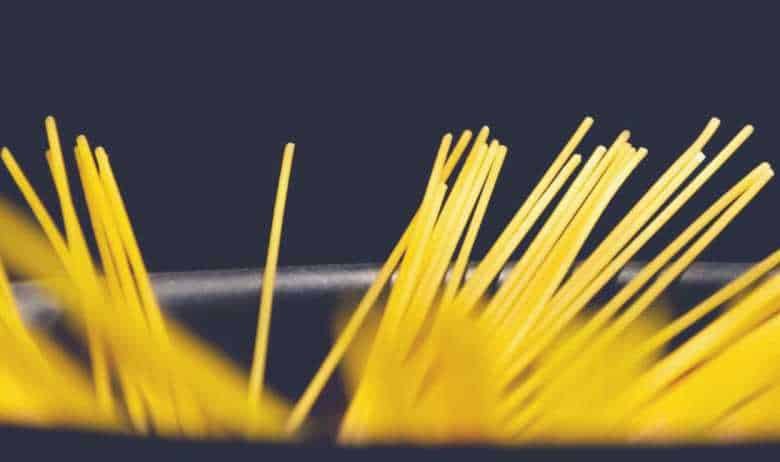 Cooking Spaghetti In A Skillet

You’ve probably got the gist of how this works at this point, but here are the exact instructions to follow:

Step 1 – Use The Right Kind Of Skillet

For this to work, you really need a skillet with a diameter that matches the length of the spaghetti.

For most dried spaghetti, that means a skillet size of around 10 inches. You could always break the spaghetti up for a smaller skillet if you’ve no other choice.

Step 2 – Lay The Spaghetti In The Skillet

Next, take your clump of dried spaghetti and lay it out in the skillet.

It doesn’t need to be separated that much and it’s fine to leave it clumped across the middle of the skillet.

Just make sure the pile is flattened out enough that you can add water without the liquid spilling over the sides.

Pour cold water into the skillet until the spaghetti is just about covered over entirely with liquid.

If you take the shortcut and add your dried spaghetti directly to water that’s already boiling, the pasta is far more likely to stick together during the cooking process.

As we’re using much less water in the skillet, it doesn’t take nearly as long to boil from cold.

I think it’s well worth enduring this little extra waiting time to get much better results.

Sprinkle a little salt along the length of the spaghetti strands.

Turn up the heat and wait for the water in the skillet to boil.

When you’re using the skillet method, I recommend cooking the pasta for about a minute or so less than the packet instructions suggest.

Do this and you’ll get the perfect al dente texture from your spaghetti.

Benefits Of Cooking Spaghetti In A Skillet

I think the benefits of using this technique are pretty clear:

I think the last two reasons in particular make this method worth trying at least once.