Cast iron is a tremendously durable cookware material, one that many serious home chefs use as the backbone of their kitchen operations.

It’s vital that it’s stored correctly though, as there are two big enemies to watch out for here: moisture, and the rust that rapidly ensues from wet cast iron.

How to store a cast iron skillet so it avoids these issues though? There are a few tried and tested techniques which I’ll quickly outline here.

In the rest of this guide, I’m going to talk about each of these options in greater depth.

I’ve also included some extra general storage and maintenance tips which will help you get a lifetime of good service from your cast iron skillet.

Before looking at the individual storage solutions for your cast iron skillet, it’s important to understand why moisture is such a problematic thing for cast iron.

Exposure to moisture is the fastest way to introduce rust to any cast iron pot or pan.

It can be cleaned off, but you’ll end up having to re-season the cooking surface afterwards. That’s an extra kitchen task no one really needs.

With that out of the way, let’s move onto some of the tried and tested methods for storing cast iron cookware. 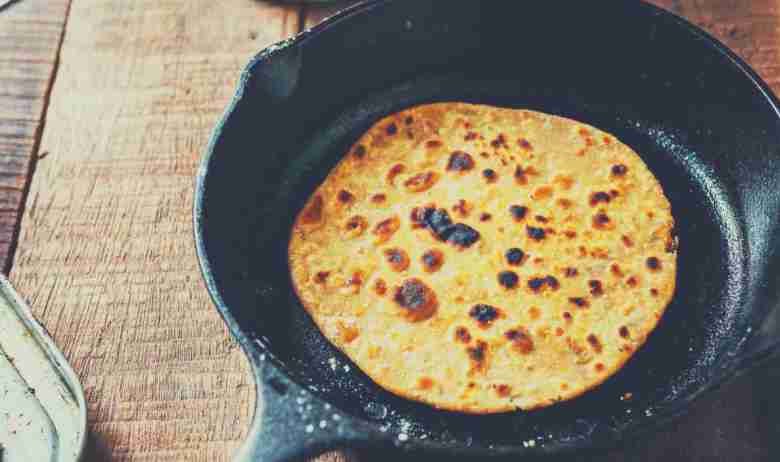 Method #1 – Store It In A Dry Cupboard

The emphasis here is very much on dry.

There’s absolutely nothing wrong with storing your cast iron skillet in a cupboard, but make sure it’s fully cleaned and then dried before you place anything inside it.

A couple of things to watch out for here:

If you’re going down this route, I think the best thing to do is have a dedicated cupboard just for your cast iron cookware.

That way you’ll have one specific area that needs to be checked for moisture and kept clean and dry at all times.

Method #2 – Stack It With Other Cookware

If you’re going to be stacking cast iron cookware on top of each other, separate each piece with some kind of gentle cushioning.

You can buy some quite clever fabric separators from the usual online marketplaces. This is the best approach if your budget can stretch to extras like this.

As a bare minimum though, you can use some kitchen paper towels to create a soft barrier between your pots and pans.

Change them regularly though, as they can soak up even the tiniest amount of moisture in your kitchen. That will then spread to your cast iron surfaces.

There’s another reason for adding some kind of separator too.

Pan exteriors take the brunt of the punishment in the kitchen, and they can quickly become quite rough.

Placing those in direct contact with the more delicate seasoning surface of your cast iron is asking for trouble. At best you’ll have to go to the trouble of re-seasoning your pots when you next need to use them.

If you’re the type to show off your cookware collection, you may already have a hanging rack located above the cooker.

Although it’s an extra expense, there are some big benefits to taking this approach:

Your cast iron skillet will, of course, need a built-in hanging hook in the handle. Most modern skillets have one, but this might be a problem with older cookware.

Keep in mind too that cast iron is a hefty material, and a hanging rack can only take so much punishment. Don’t overload it, and test how well it holds the weight as you add extra items.

I see this option mentioned quite frequently. I’m not convinced it’s the best way forwards, but I’ll include it here as you might find it useful.

What’s the biggest storage space in your kitchen that gets used for the least amount of time?

You’ll need to be sure that every part of your cast iron skillet is safe to store in the oven though, as I guarantee you’ll forget to take it out before pre-heating at least once!

The big advantage here is that if there’s a drier part of the kitchen to store pretty much anything, I’ve yet to find it.

Method #5 – Leave It On The Stovetop

This is similar to the suggestion above, except you leave your cast iron skillet out on the stovetop itself.

This provides many of the same advantages in terms of dryness and warmth.

It also comes with its own perils that you need to be aware of though.

Even if you have an enormous stovetop, you’re unavoidably exposing your cast iron skillet to spills and splashes.

You’ll need to find a new home for it while you’re cooking, or be very careful about thoroughly cleaning up any liquids. 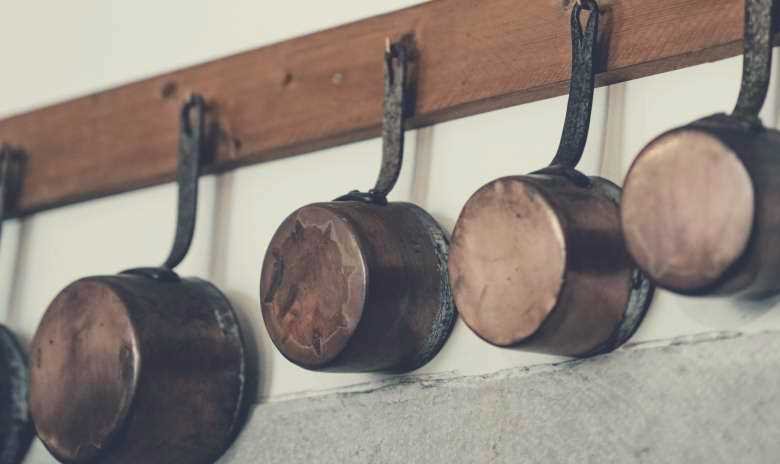 Here are some final tips that I wanted to include. Keep this in mind when you’re looking for a new home for your cast iron skillet.

Keeping leftovers in your cast iron skillet is a recipe for disaster.

It’s much better to add your leftovers to a suitable airtight container, and then store them in the refrigerator.

Pretty much all food contains at least some moisture, and you only increase the risk of rust by using your skillet as a storage vessel.

I’ve mentioned this earlier but be particularly wary of working with acidic ingredients in your cast iron cookware.

Acidic ingredients don’t play nicely with cast iron, and can lend a distinctly unpleasant after-taste to future food you prepare too.

If there’s no way around this, just be sure to clean up as quickly as you possibly can.

Finally, I wanted to answer a few related questions that often come up around this subject.

Which Cast Iron Skillet Is The Best?

The biggest name in the skillet world is Le Creuset.

Its signature skillet is made from cast iron but layered with enamel for extra protection and a kind of non-stick effect.

It’s quite expensive, but if you really want the best of the best it’s the only show in town.

You can read my review of the Le Creuset Signature Skillet elsewhere on Viva Flavor.

I’ve also compared it to some of the biggest competitors in the field if you’d like to browse some worthy alternatives too.

How To Clean A Cast Iron Skillet

If you have a sticky skillet, the first thing to do is check that you’re not simply using too much oil – or the wrong i of oil.

Have a look at my guide to cleaning a sticky skillet if you need some pointers on fixing this problem, and avoid it in the first place.

As for general clean up of a cast iron skillet, the advice here is pretty simple.

First, always wash by hand. Cast iron cookware shouldn’t be considered dishwasher safe, as you risk damaging the seasoning. Then there’s all that water sloshing around.

Next, use a soft sponge – with a little soap if necessary – to gently clean the surface. If there’s anything stubborn on the surface, you can soak the skillet in warm water but only for a few minutes.

Remember, dry your cast iron skillet off thoroughly before returning it to its clean and dry storage space.

Many people like to add a drop of oil to the pan surface, worked in gently with a paper towel, before putting it away.

If everything’s gone really wrong and your skillet is rusty, I’ll refer you to Lodge’s guide to removing rust. It’ll take some work on your part, but it is possible to repair a rusty skillet!

Hopefully that’s given you all the information you need to store your cast iron skillets and other pans correctly.

Whichever of these methods you choose, make sure your cast iron cookware is stored somewhere that is dry as a bone.

Be sure as well to protect the cooking surfaces if you plan on stacking anything. No one wants to season their pans more often than they have to, after all.