If you’re the kind of person who isn’t in a rush every morning, then it’s fair to say the rest of the world envies you!

For most of us though, there’s little time to waste getting started with the day. I still need to get a decent cup of coffee in me though, and while juggling the frantic start that’s part of life with a young family.

Enter Keurig and its many single-serve coffee machines. They’re designed to get a cup of great tasting coffee inside you with the minimum of fuss and time. One of its most popular machines is the K475, which offers a little more functionality than smaller coffee makers, while still getting the basics done right.

In our Keurig K475 review, we’re taking an in-depth look at what you need to know before buying one of these machines.

Who’s up for a brew?

Everyone who cares about their coffee likes it just a little bit different. If there are multiple coffee drinkers in your household, it’s worth getting a machine that lets you tweak the settings – and store them too.

Consider also the size of the water reservoir that comes with the machine. The smallest are around 30oz, which is barely enough for a few cups!

I recommend looking at your own cup sizes, and thinking about how many times you’ll have to refill the tank to keep enough coffee flowing for you.

Do you ever host a lot of people?

Some Keurig machines have at least the capability to brew in larger sizes for when you have more people than usual in your house.

Not every machine actually comes with the accessories you need to make that a reality though. You’ll have to buy them separately if you think you’re going to need them.

How much space do you have?

Check the specs of the machine carefully before settling on it. To actually get the coffee pods in and out you’ll need around 6-7” of extra space above the machine’s stated height.

It’s got loads of settings to help you get the cup of coffee that’s perfect for you (and others) and the water reservoir will prove large enough for most casual coffee drinkers.

You can also set a timer for the machine to come on and switch off. I like being able to prep my morning coffee the night before, and it’s also good to save energy when I know the machine doesn’t need to be in use.

As with most Keurig machines you’ll need to make some extra investments to get the most out of it. For example, it can accommodate brewing with accessories such as the K-Mug and K-Carafe, but you’ll need to buy these separately.

There’s an argument to be made that this means you don’t have to pay a premium for accessories in the box that you’ll never use, but these extras should be factored into your buying decision. Those extras are very handy for when you have visitors and need to make more coffee from a single brew.

Before we dig deeper into the features of the Keurig 2.0 K475, here are the complete specs and colour options available for the machine

The 13.45” height makes the K475 a fair bit bigger than similar machines, so make sure you’ve got enough space to work with. You’ll also need a bit more room to actually get the pods in – 18-19” should do it.

It’s also a bit heavier than other Keurig machines. Take that into consideration if you’re going to be moving it around a lot. If it’s going to sit where it’s placed for a long time though, don’t worry about this too much.

You’ve less colour options to play with, and certainly when compared with machines like the K250.

Fortunately the ones that are available are very traditional and suit my kitchen fine:

Here’s what you get out of the box when your K475 arrives:

The water reservoir in the K475 has a capacity of 70oz. That’s bigger than some of the other Keurig machines, but not as big as the K575’s 80oz.

How big is big enough? That’s a question you can only really answer for yourself, but a small cup of coffee is around 10oz.

That’s seven servings in total from the K475, then, but that number obviously goes down if your cups are bigger.

The K475 comes with a 2.4” digital touchscreen which is pretty easy to read and use.

The screen’s bigger here than on machines found further down the Keurig range, and will be particularly helpful for anyone in the household who’s eyesight isn’t quite what it used to be.

Most of the Keurig machines at this level are very easy to use and the K475 is no exception. You have the extra temperature options to play with if you want, but this is very much the kind of fast-brewing coffee machine Keurig’s become famous for.

The coffee itself is hot and perfectly brewed, and there are literally hundreds of different flavours to choose from.

Alternatively you can carry on using your favourite ground coffee if you pick up the reusable K-Cup separately. That’s much better for the environment as well, of course.

If you’re using pods, here are the different brew sizes on offer:

You’ll struggle to find a quick-brewing coffee machine that doesn’t make at least a little bit of noise, but Keurig’s worked some new motor tech in the K475 to address some of the noise complaints of earlier machines. It’s much better, at least.

Additionally, the K475 brews very quickly. Expect your first cup to take around one minute, although I know of people who have owned this machine a while and found that the initial brew time can inch up over time.

Finally, there’s a hot water dispenser. It’s quick, and you can use it to whip up other drinks like tea and hot chocolate.

The good news is that the K475 is compatible with accessories like the K-Mug and the K-Carafe. The first lets you take your brew on the road, while the latter lets you cook up a much bigger batch of coffee.

The bad news is that neither of these arrive in the box with the K475. You’ll need to buy them separately if you want to take advantage of the benefits they provide. That’s quite common with Keurig systems though, so we’re not singling out the K475 for particular criticism here.

If you’re just looking to fill up your own travel thermos though, you can remove the drip tray very easily and slot your mug in beneath the spout. Just make sure your travel mug is no taller than around 7”.

No single machine is perfect for everyone, but there a few similar coffee makers to consider about before settling on the K475:

The K575 is the bigger brother of the K475 and there a few ways that it improves on the design of the latter.

First of all it’s got an 80oz reservoir, compared to the 70oz found in the K475. That means less refilling throughout the day.

It’s also got a larger display at 2.8” compared to the K475’s 2.4”. That’ll make it even easier to use if you find yourself squinting at appliances.

The SS-15 is actually very similar to the K575 discussed above, although it of course lacks that classic Keurig look.

It falls a little short when it comes to the water reservoir though. The SS-15 only has a capacity of 40oz, which is fine if you’re a very light coffee drinker.

It does, however, have a self-cleaning setting. Taking good care of your coffee machine is really important if you want it to have a long life, and anything that makes this easier is a plus in our book.

It also comes with a reusable filter for your own ground coffee, unlike the Keurig machines where you have to buy an extra accessory.

If you’ve owned a Keurig in the past and want to upgrade, then the K475 is a really good option. It’s also a great starting point for those of you who are new to the Keurig experience.

You get very quick, strong and tasty coffee out of the machine, and I find a 70oz water reservoir to be perfectly adequate for my own needs.

I also really like the ability to store personalised settings on the K475, so that everyone gets the coffee they want without having to constantly fiddle with the thing.

It’s a little heavier than other Keurigs, but this won’t be a problem if you don’t plan on moving it around very often. Just watch that height though, and make sure there’s an extra 6-7 inches to spare for removing and inserting pods.

You’ll also need to pick up those other accessories if you want the biggest brew functions. That said, I actually quite like being able to upgrade machines as my needs change, rather than having to shell out for a whole new appliance every time.

Head over to Amazon’s K475 listing if you want to find out more, and check out the latest price too. 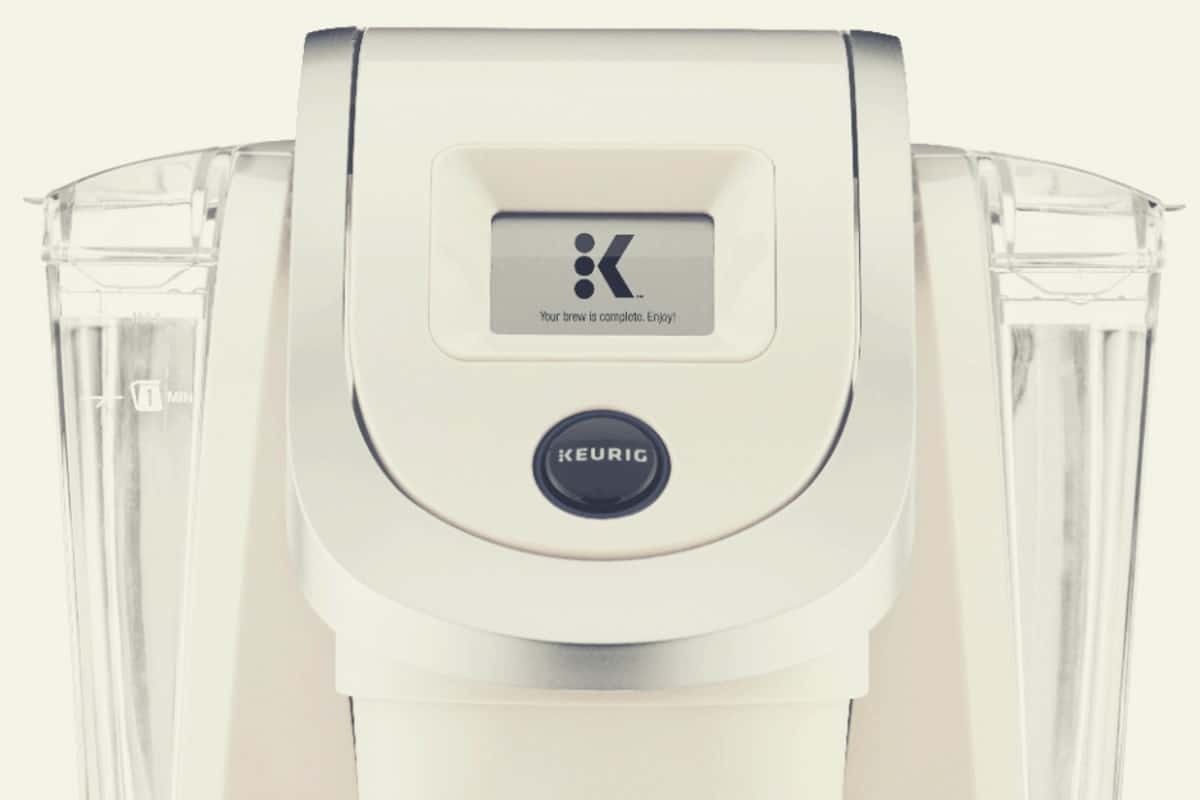 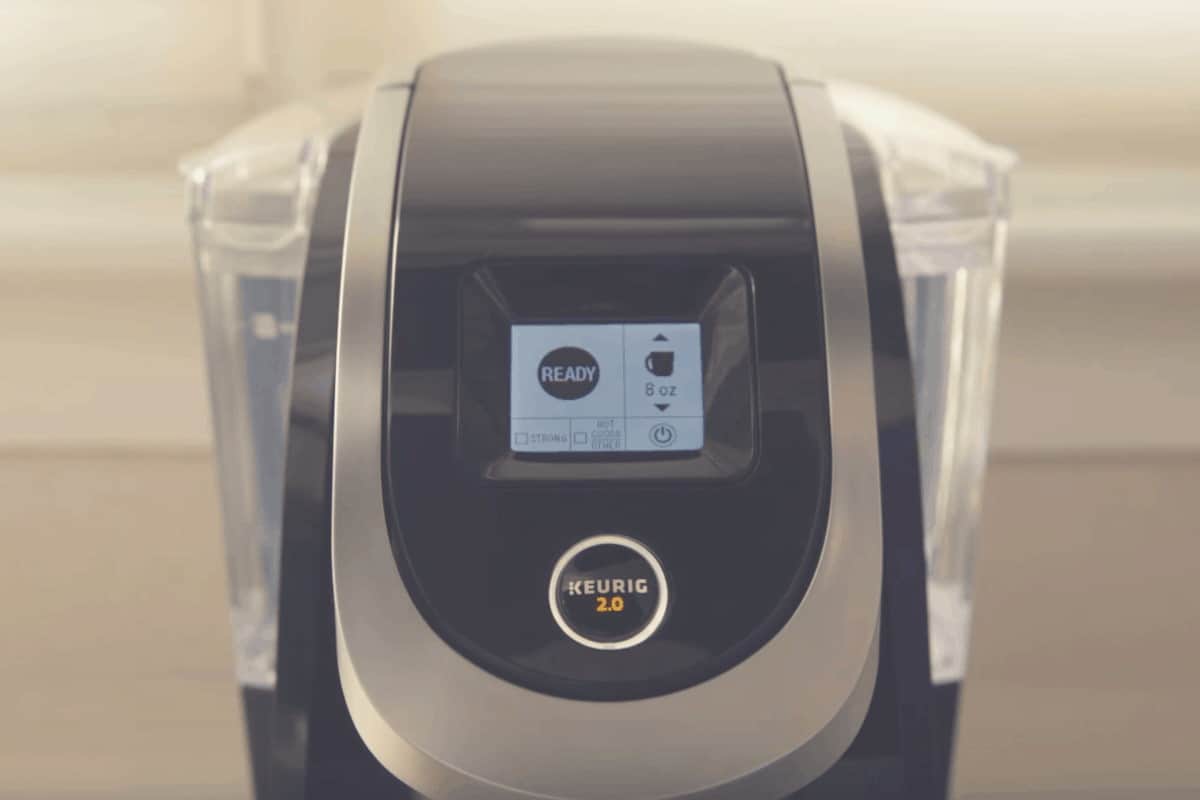 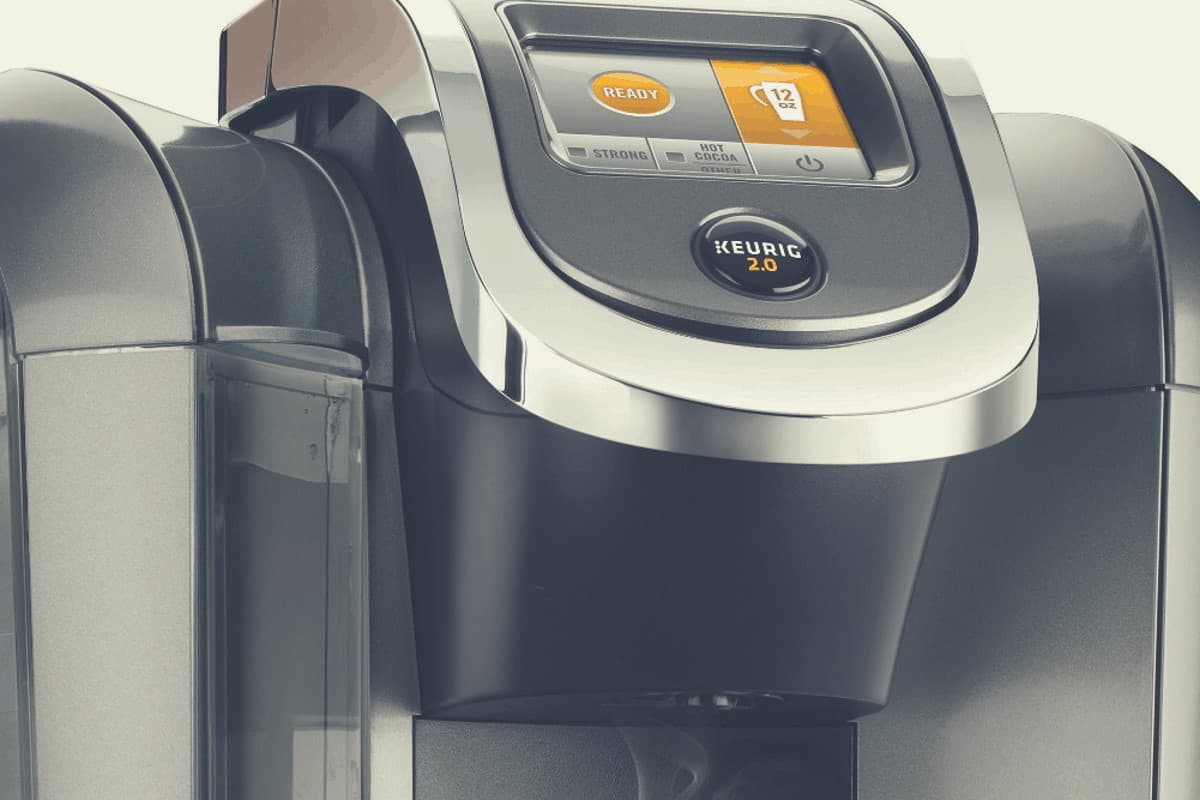 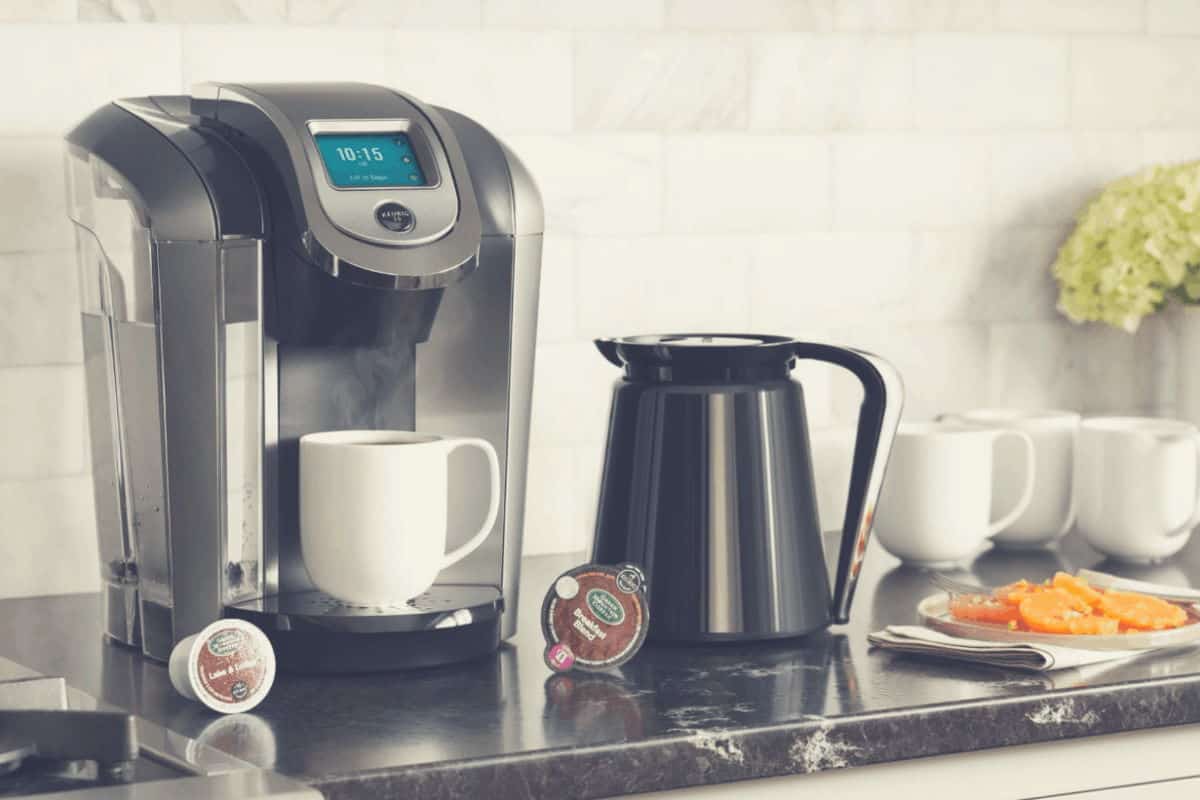 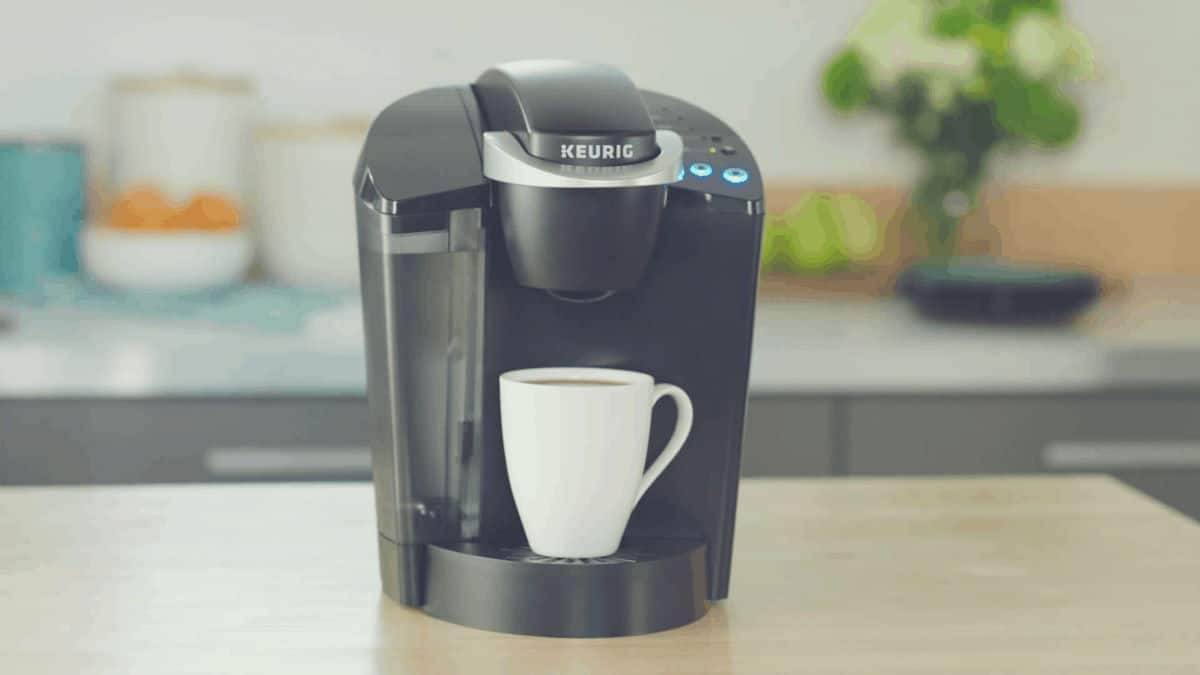 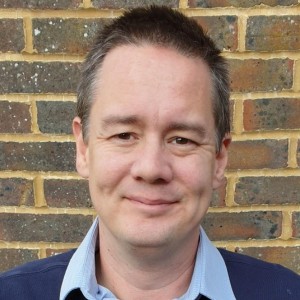