Staub Vs Le Creuset: Who Makes The Best Dutch Oven?

If you’re looking to invest in a Dutch oven, there are two big names going that frequently find themselves going head to head: Le Creuset and Staub.

There are certainly cheaper alternatives on the market, but I’ve yet to find one that doesn’t disappoint in terms of even heat distribution, durability and a snug-fitting lid.

So, with that said, which is better of these two giant brands?

In my Staub vs Le Creuset guide I’m going to cover the key features of a high performance Dutch oven. I’ll also explain how each of these brand stacks up against each other in each category.

If you’re in a rush and haven’t got time to read the whole article, here’s a quick summary:

Here’s a quick overview of what separates Staub from Le Creuset:

In the rest of this guide, I’m taking a deeper dive into how these two cookware brands perform against one another.

I’ve started with a quick review of each brand’s flagship cast iron Dutch oven, as I think that will give you a good overview of what to expect in each case.

I’ve then expanded on the main differences between the two, and included my own thoughts on which one is likely to be better suited to your own circumstances.

From the fiery orange coloring to the overall shape & design, the Le Creuset Dutch oven has the classic look that we all know and love.

Despite the colorful exterior, the inside of this enameled cast iron cookware is white. This light interior comes with some pros and cons you need to be aware of. 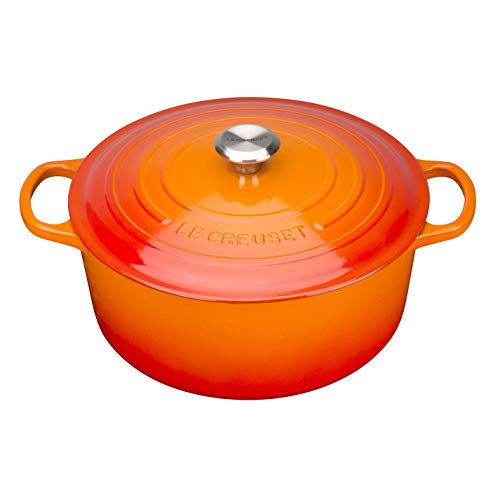 (This article includes affiliate links. If you click on one and make a purchase we may receive a commission at no extra cost to you.)

On the one hand, it’s a lot easier to check on the progress of your cooking when you have a white enamel coating. When you have a dark interior, it’s trickier to get a quick glance at how your meat’s browning, for example.

On the other hand, the inevitable scratches you’ll accumulate on any cooking material will be more noticeable here. It’s something you’ll need to weigh up against your own preferences for keeping your cookware pristine.

I’ve highlighted the classic orange model here, but it’s worth mentioning that Le Creuset offers an extremely wide variety of color options. Have a browse through that product listing to see what’s available at any given time.

If you want to stick with a classic look, you’re well-covered. If you want to add some pizzazz to your kitchen though, the Le Creuset Dutch oven has more options than you’ll know what to do with.

One of the big differences between Staub’s Dutch oven and Le Creuset’s is that interior cooking surface.

Staub’s is layered with black enamel, which also has a certain amount of texturing. This helps to prevent food from sticking to the surface. 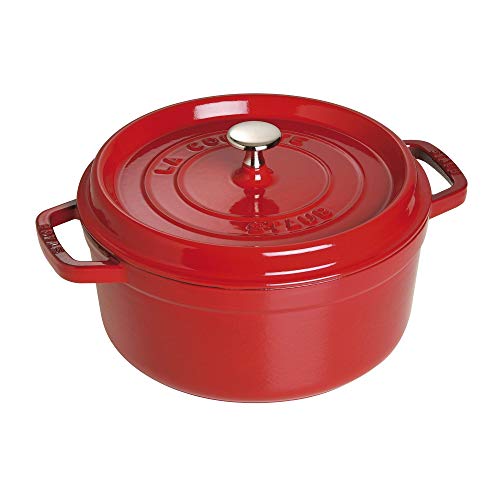 That’s definitely a benefit, but it also comes with its own drawbacks.

First, it’s a little harder to clean a textured surface. Although both of these Dutch ovens are dishwasher safe, I would always recommend washing this kind of premium cast iron cookware by hand.

In other words, expect to apply a little extra elbow grease when you’re cleaning this one up.

The dark nature of this layer also makes it harder to see how the progress of your cooking is going. If you’re browning meat, for example, it’s just that little bit harder to get a view of things with a quick glance.

There’s one extra clever little design touch to the Staub Dutch oven that I want to highlight here.

The underside of the lid captures the moisture generated over time as your food cooks. It then cascades this back onto the food with what Staub describes as a “rainforest effect”.

This helps to keep the food moist, without you having to baste it continuously. If you want to actually remove moisture from the dish though, you’ll need to tilt the lid somewhat so it can escape.

In the next section I’m going to take a much closer look at what separates Le Creuset from Staub.

Before that though, a quick warning. It’s not always a black and white verdict in each case.

With this information though, you’ll be able to make an informed decision about the best option for your own kitchen. Don’t take my verdict as gospel! I’ve chosen what works for me but you may have different priorities.

Both the Le Creuset and Staub Dutch ovens feature an enamel layering over that base cast iron material.

The main difference, however, is the color that each manufacturer favors.

In the case of Le Creuset, the enamel coating is white. This makes it easier to clean, and also easier to see how the cooking’s going at any given time.

On the flip-side, it also makes scratches more visible, and the heating’s not quite as even.

Staub takes a different approach with its enameled Dutch oven, and in two very specific ways.

First of all, that enamel layer is black. This does a much better job of hiding the kind of wear and tear that any Dutch oven will attract over time.

It also has a textured effect. This helps to prevent food from sticking to the surface. Just keep in mind that if you do get anything burned onto it, it’s harder work to remove it from the ridges.

VERDICT – This is going to come down to personal preference. If you like easy cleaning and cooking at a glance, choose the Le Creuset. If you want a more textured, non-stick surface and don’t mind the potential extra clean-up work, choose the Staub Dutch oven instead.

When it comes to brightening up your kitchen, Le Creuset definitely has the upper hand.

There’s a wider variety of colors to choose from, from the tried and traditional to the more modern looks. New colors come out quite often as well, and to suit the changing tastes and demands of the market.

Le Creuset is fairly generous when it comes to supporting its color options too. If they’ve still got the item in stock, they’ll continue to sell it.

That’s helpful when you’re building out a collection of cookware, and don’t want to end up with a mismatched set!

None of this is to say that Staub doesn’t offer a colorful collection of its own. It’s just not as generous as the Le Creuset range.

With that said, Staub has a tendency to stick with its color options for a little longer than Le Creuset. You can feel a little more relaxed about building out a cookware collection over time if you go with this brand.

VERDICT – This one’s a little too tough to call, and will likely depend on your own circumstances. If you want the widest option of colors and aren’t worried about options being retired, Le Creuset Dutch ovens are better. For more long-term reliability, Staub has a smaller but more dependable selection.

This is one area where I think Staub definitely takes the top spot with its self basting lid.

There are little knobs on the underside of the Staub lids, which capture moisture and then shower it around the food as you cook.

It effectively bastes the food as you go, using the tasty juices to keep everything inside the Dutch oven nice and moist. It’s a really snug fit, and very little moisture escapes.

There will be times, of course, where you don’t actually want to retain the moisture.

When this happens, you’ll need to angle the lid on top of the Dutch oven to let the right amount out. That might prove quite fiddly, depending on the exact dish you’re working on.

As for the handles on the lids, Staub favors an all-metal approach so it can withstand high heat in the oven. Le Creuset’s handles aren’t metal, but are instead treated so that they’re oven-safe to high temperatures.

VERDICT – The Staub wins out here, particularly if you often work with lower quality cuts of meat. It’s effectively a self-basting mechanism, which means one less thing to worry about when you’re cooking!

Cast iron is one of the heaviest materials you can work with in the kitchen. It should come as no surprise, then, to learn that both of these Dutch ovens are heavier than the average pan.

With that said, the Le Creuset is a little bit lighter to carry than the Staub. That’s something to think about if you have a weak grip, or you’re buying for someone else who might struggle.

How big a problem this proves to be will also relate to the size of the cast iron pot you’re buying. Bigger is of course heavier.

All other things being equal, if you’re buying a larger Dutch oven it will make sense to go with the lighter Le Creuset range.

VERDICT – Le Creuset cast iron wins out here for my money. You’ll only want one Dutch oven in your life, and it’s likely to be a bigger one as a result. The further up the size chart you go, the heavier these things get. What starts off as a minor advantage soon becomes a big one!

This follows on quite neatly from the issue of weight.

A lightweight Dutch oven is no good if it’s still a pain to carry, after all.

If you look at the product images further up the page, you’ll notice that the Le Creuset Signature Dutch oven has rounder, somewhat larger handles.

These are more comfortable to hold which is one plus point. Crucially though, this thing is also going to get hot. Chances are you’ll be carrying it around the kitchen using oven gloves.

The Staub handles aren’t a major problem, but you might find the more generous handles of the Le Creuset to be an advantage.

This goes double if you have large hands!

Staub Vs Le Creuset: The Winner

Let’s be clear about one thing here.

They’re both pretty pricey pieces of cast iron cookware, but if you’re going to be doing a lot of Dutch oven cooking then it’s a worthwhile investment in my opinion.

To wrap things up though, I’ll quickly summarize who will get the most out of each brand:

Choose The Le Creuset If…

Choose The Staub If…

If you want to find out more about either of these Dutch ovens, just use the links above to check out reviews from their many happy owners.