If you’re beginning to branch out from the staples of cookware, you might have come across something called a French skillet.

What is a French skillet though, and how does it differ from a traditional frying pan?

The answer’s quite simple, and for the most part it’s all about the sides of the pan:

That’s the very simple answer, but as always there’s a little more deal to discover.

In the rest of this guide I’m going to explain those differences in detail. I’ll also cover how each of these pan types perform in the kitchen.

By the time you’re done reading, you’ll have a much better understanding of what a French skillet can do for you.

You can then decide whether or not it’s worth adding one to your cookware collection!

(Want to learn more about cookware? Take a look through my archive for more guides and reviews.)

Let’s Start With The Basics

Although the frying pan and the French skillet share much in common, let’s quickly run through the basics of both:

The frying pan needs no introduction really, but here are the most important things to know when comparing it to a French skillet:

Frying pans are commonly found in sizes ranging from the mini frying pan at six inches, to bigger family affairs at 16 inches – or more.

Which one you settle on will depend of course on your own needs. Even if you’ve a large household to cook for, it can be worth investing in a smaller frying pan for those quick frying jobs for one.

Most frying pans have a perfectly flat bottom, which is particularly helpful for searing meats. As the whole cut of meat can sit across an even surface, you don’t have to worry about any one section feeling more of the heat.

Frying pan sides tend to slope outwards, and are shallow compared to a French skillet. For this reason, they are really not suitable for when you’re working with a lot of liquid.

You may find an additional helper handle on the opposite side of a larger frying pan. This makes transferring a heavy pan around the kitchen both easier and safer.

A frying pan with a lid is a saute pan!

Pick a material at random and someone’s probably used it to make a frying pan!

Stainless steel is the most popular option for home kitchens, as this material resists rust and lasts a lifetime if cared for properly. Sauces in particular are notorious for acidity, which can be problematic when you’re working with other materials.

With that said, aluminum, ceramic, copper and many more types are available. Each has their pros and cons, depending on your stovetop and cooking preferences. 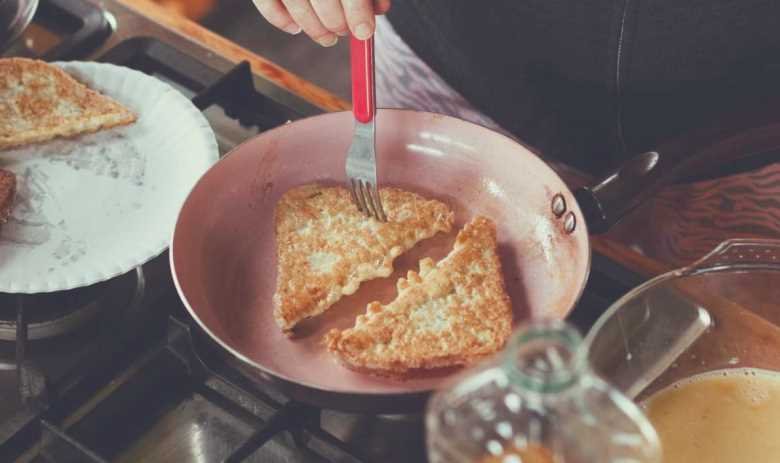 As for the French skillet, this is what you can expect to find when you’re shopping around to add one to your collection.

The largest French skillet is typically smaller than the largest frying pan you can find on the market. 12 inches seems to be the upper limit for this kind of cookware.

Just like the frying pan, a French skillet has a completely flat bottom to help with heat distribution.

The sides on a French skillet are usually taller than a frying pan’s, and somewhat straighter too.

This extra height is very useful when you’re working with liquids, as there’s much less danger of the contents ending up on your stovetop!

Note, however, that flipping food in a French skillet is a good deal trickier than in a frying pan, because of those tall, straighter sides.

Like frying pans, French skillets tend to have one longer handle. Although it’s not impossible to find one with a helper handle, they’re rarely large enough to justify the need.

Again, once you add a lid to a French skillet you’re looking at something more closely resembling a saute pan.

Most French skillets are made from stainless steel. They often have a copper or aluminum core to help with heat performance too.

Note that it is not at all common to find a French skillet with a non-stick coating. If this is really important to you, expect to pay a premium for the models that do feature this sort of handy working surface.

When Should You Use A French Skillet Over A Frying Pan?

I think the simple answer to this question is that you should use a French skillet when you’re working with greater volumes of liquid.

The extra tall sides make it much easier to – gently – stir the contents, without half of it ending up on the stovetop.

You should only really buy one if you’re sure this is going to be an ongoing problem in your kitchen though.

It’s a little like my comparison between woks and frying pans. You can get perfectly good results by sticking with a frying pan, but you may want to upgrade when it really proves necessary.

Now you know what a French skillet is, and the advantages it offers over a frying pan.

Don’t spend money you don’t have to, but do consider adding a French skillet to your collection if you need a little extra depth to work with.