Why Use A Wok Instead of A Frying Pan?

If you have a small kitchen like I do, then you need a pretty compelling reason to add any more cookware items to your collection.

A wok in particular is quite a bulky thing, so why use a wok instead of a frying pan?

There are a few quick reasons which I’ll outline here, before going into much greater detail in the rest of this article:

Let’s quickly cover off some of the negatives though, so you know what you’re in for if you decide to add a wok to your collection

That’s a very brief overview, but if you’re in a rush it should answer the main question!

In the rest of this article, I’m going to go into greater depth about these pros and cons. I’m also going to cover the benefits and limitations of sticking to the good old frying pan.

By the end of it, I think you’ll have a much better idea whether this is going to be the right kind of addition to your own kitchen. 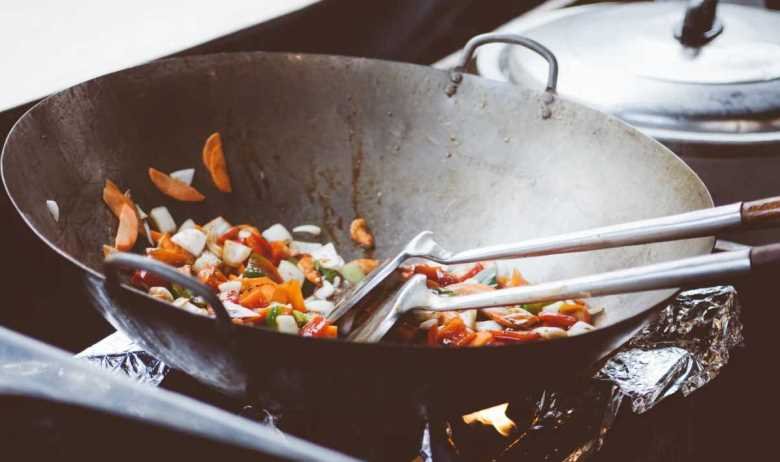 Do You Really Need To Buy A Wok?

It’s something of a myth that you simply cannot make high quality stir fry food unless you buy a wok.

The fact is, you can get very similar results from a high quality stainless steel frying pan.

Will you be able to compete with the pros? No, but then they’ll likely outperform your best wok-based stir fry using nothing more than a saucepan!

If you’re going to be making a lot of wok-friendly food though, I think you’ll get a real kick out of having the best possible tool for the job.

Let’s take a closer look at the main differences between woks and frying pans, so you can decide on what you need in your own kitchen.

The classic wok design features a rounded bottom with higher sloping sides. Liquids will tend to gather in one part of the base.

These deeper walls trap more of the heat, cooking everything in the wok more evenly – and much more quickly too.

Frying pans near universally feature a flat bottom, with a wider cooking surface to work with. The sides of the frying pan are shallower as well.

Woks are traditionally made from cast iron. This is super hard-wearing stuff, but requires regular maintenance in the form of oiling.

If you don’t use your wok very often, you may find yourself frustrated when you go to whip up a stir fry and discover it’s not up to the task through neglect.

It’s worth mentioning that many modern woks are made from carbon steel instead. This stuff is much harder-wearing and requires less TLC, so might be a good middle-ground for you.

You’ve a huge number of options here, although the most popular frying pan material is stainless steel, often with an aluminum core.

This material provides excellent heat distribution and durability, and if the pan doesn’t have a non-stick surface it will be safe to put through the dishwasher as well.

These things are built to last with minimal maintenance, which does much to explain their enduring popularity.

This is where things start to get interesting!

If you’re in a rush and you’re really on top of your cooking game, a wok will save you a huge amount of time.

It requires you to be on the ball though, especially if you’re a beginner. Food cooks really fast in these things, and you’ll need to be ready to remove it from the heat at just the right moment.

It’s not something you can leave in the background either. You’ll need to stir the ingredients continuously.

Woks are excellent though if you’re working with a lot of ingredients, as it all cooks very evenly. If you’ve chopped your veggies to a reasonably uniform consistency, you’ll have a perfectly cooked stir fry in a flash.

What does the humble frying pan have going in its favor then?

Well, as useful as a wok can be, they’re really not suitable for working with softer ingredients.

You have to keep stirring the contents all the time, which is fine for hard vegetables but less so for more delicate items.

If you can only buy one or the other, you’ll struggle to sear meat with a wok, for example.

The rounded design of the wok’s bottom makes it very hard to properly brown the contents. The bigger surface area of a frying pan, on the other hand, makes this much, much easier.

This is related to cooking performance but I’ll make a couple of quick comments here as they’re important to know about: 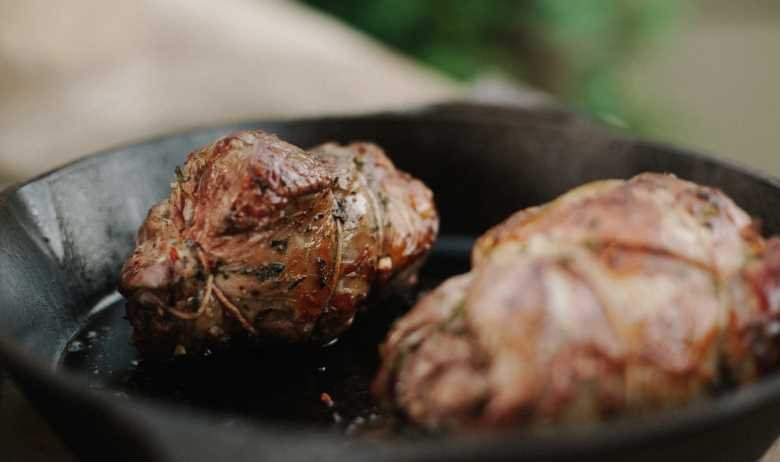 By the nature of their design, woks are harder to store than frying pans. They’re fatter and taller, making them tricky to tuck away in a small kitchen.

Woks also require regular oiling to keep them in top condition. Neglect a cast iron wok and you’re asking for rust to develop.

While we’re talking oil, you’ll typically use more of it in a wok than in a frying pan. That might be an issue if you’re counting the calories.

Woks are also trickier to clean than the average frying pan. You need to clean your wok quickly after cooking with it, and you won’t be able to use any kind of kitchen detergent on it either.

Why use a wok instead of a frying pan, then?

My own conclusion would be: