If you’re a fan of the intensely salty country ham, then you’ll be pleased to know it’s very easy to cook slices of it in a skillet.

In this guide I’ll explain the steps you need to take, and answer all of your questions about working with country ham too.

How to cook country ham slices in a skillet

In the rest of this guide, I’ll answer some of the most common questions people have about working with country ham.

Should You Soak Country Ham Slices?

This is seriously salty stuff. Whole country hams are typically soaked in water for up to 24 hours, in order to add moisture and remove some of that salt.

Do you need to soak the slices though? It depends on your tolerance for that powerfully salty flavor.

If you are going to give those slices a second soak, do it in a water bowl for an hour or two before cooking.

Make sure they’re fully dried afterwards though, otherwise they’ll spit and make a mess while they’re cooking in the skillet.

What Is Country Ham Anyway?

There’s one simple difference between a city ham and a country ham:

For the country ham, the result is a drier and saltier meat.

City hams, on the other hand, are milder on the palette and tend to be juicier too.

Most of us are more familiar with the taste of city ham, and the more intense flavoring of a country ham can be quite a shock to the system!

You’ll notice more intense smokiness, the meat itself will be drier, and there’s an inescapable saltiness to the flavor as well.

Why Is Country Ham So Salty?

The simple answer? Country hams are preserved using salt. They dry out in this stuff, and have plenty of time to absorb the preservative.

Most country hams are cured for up to two months during the cooler months. That’s plenty of time to get seriously salty.

To reduce the salt content, you can soak the country ham first. Doing so will draw the salt out of the meat, while adding some extra moisture at the same time. 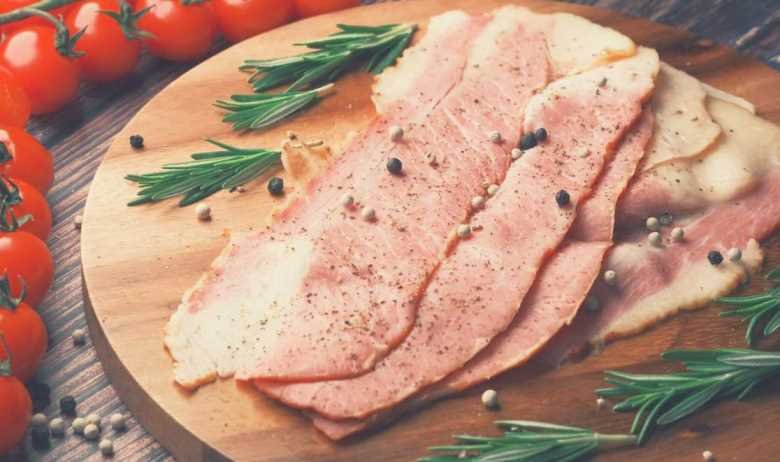 There are lots of related questions when it comes to frying country ham. In the next section I’ll answer some of the most common.

How Long Does It Take To Fry Country Ham Slices?

This varies depending on your personal preference, but I recommend frying a country ham slice for 2.5 minutes on each side as a minimum.

This of course depends on the heat output of your own stovetop. Once it’s brown on the outside, it’s ready to serve.

You can fry your country ham for a little longer if you wish. For a really crispy finish, consider frying each side for 4 minutes instead.

Don’t fry it for any longer than that, and keep a mental note of how long you cooked it for so you can adjust the timings to suit your taste better next time.

Does Country Ham Need To Be Cooked?

A country ham that’s supplied as pre-cooked can be eaten straight away. As always, check the packaging carefully for you’re sure.

Otherwise, your country ham will have been provided in a preserved form.
It will need to be cooked correctly, with frying being the most popular method.

Country ham can be supplied as smoked, but is just as often available unsmoked.

Can Sliced Country Ham Be Frozen?

Yes, according to the USDA. In fact, an uncut, dry-cured country ham can be stored at room temperature for up to a year!

The next two questions have a little more detail on storing country ham in the fridge or the freezer.

How Long Will Country Ham Store In The Freezer?

Regardless of whether it’s been cut, cooked or both, a country ham should be eaten within one month of storing it in the freezer.

How Long Will Country Ham Keep In The Fridge?

If a cut – but uncooked – country ham is placed in the refrigerator, it’s fine for up to three months.

If it’s been cooked and cut, you should eat it before the end of a single week.

As per the USDA guidelines I’ve highlighted above, country ham is made of tough stuff.

If the ham is whole and uncut, it can be stored at room temperature for up to a year.

The quality will definitely degrade after that point though.

How Is Country Ham Made?

There are three stages to preparing country ham:

Keep in mind that if you’re a home cook looking to sell this pre-prepared food, you cannot legally sell it to the public. It can only be supplied by facilities inspected by the USDA.

If you’d like a more detailed guide to making your own country ham at home, take a look at this excellent guide from the University of Kentucky.

How Is Country Ham Cured?

Country Ham is largely cured using large quantities of salt. There are many different recipes that can be used for the cure, but salt is very much the main ingredient.

Once the cure mixture has been applied, the country ham is then either cured in a bag or a box.

This process takes up to two months to complete, so it’s not for the impatient! It should also take place over the cooler winter months.

What Goes Well With Country Ham?

The options are limitless! Due to its origins, country ham is often used in Southern-style meals, or similar side dishes.

There’s plenty of inspiration out there on the internet, but I think this collection is a great starting point.

Now you know how to cook country ham in a skillet, how it’s cured, and how you should store it.